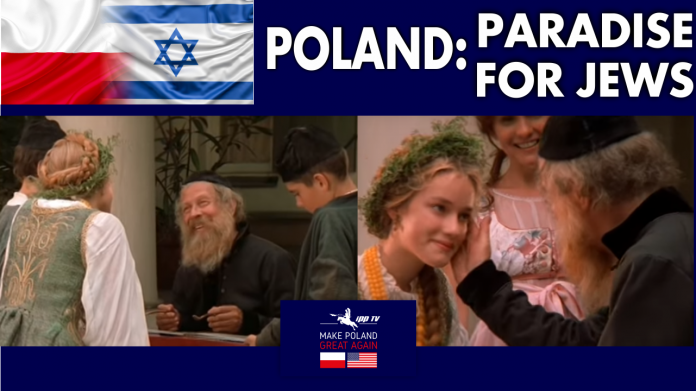 Have you ever wondered why there were over 5 millions Jews living in areas of I Republic of Poland (contemporary Poland, Ukraine, Belarus, Lithuania, Latvia, Estonia, Moldova, part of Russia) in the 20th century? You probably have no idea that we Poles share with Jews almost thousand year history!

Polish king Kazimierz Wielki is recognized as a protector of Jews. During his reign in the fourteenth century, the Polish Kingdom became a haven for banished Jews from all over the Europe – from Germany, France, Austria, Spain, Moscow.

Before the Catholic Counter-Reformation in seventeenth century Poland was one of the most tolerant and hospitable countries on Earth! It was a home to one of the most populous groups of Jews in the world! That is why Poland was called ,,Jews paradise”(in Latin paradisus judaeorum). A Polish rabbi Moses Ben Israel Isserles from sixteenth century once said: ,,If God hadn’t given Jews Poland as a shelter, fate of Israel would have been unbearable”.

At the end of the eighteenth century there were partitions of Poland by Russia, Austria and Prussia which resulted in country’s disappearance for 123 years. In 1918, during the time Poland restored it’s independence, there was a population of 3 million Jews, one the worlds biggest.

On the first of September 1939 Poland was attacked by Nazi Germany and on the 17th of September of the same year also by Russian Soviet Union. Polish army was beaten by two invaders working together in secret Rippentrop-Mołotow agreement from 23 August 1939. Despite that during WW2 Poles created the worlds largest underground resistance – Home Army consisting of 400 thousand members at it’s highest. Collaboration groups and organizations were created in other European countries invaded by Germany but not in Poland! Neither was a government collaborating with Germany. The Israel War Crimes commission estimates that roughly 0.1% of ethnic Poles were cooperating with Germans during WW2.

Nazi Germany started extermination of Jews in occupied Poland. Although only in Poland there was a death penalty for helping Jews, only here worked Żegota – hidden organization created by Polish underground government specifically to rescue Jews from oppressive regime. Poles have saved more Jewish lives than any other nation: 100 to 150 thousand Jews. One million Poles were engaged in rescuing Jews. It is the Poles who have the highest number of ,Righteous among the nations’’ awards given by Jewish Yad Vashem institute.

During WW2 over 6 million Polish citizens, including 3 million Jews was killed by Germans which is about 20% of the prewar population of Poland. Germans have killed over 90% of Polish Jews. In WW2 we suffered the most and had highest material losses of all countries.

Many Jews fought and died as Polish mates and soldiers of Polish Army during 1939 campaign and many other, for instance battle of Monte Cassino.

Here is our film about this issue (with English subtitles):

and with English lector: